Have you ever had that feeling you wanted to capture data and just send that data to just about anywhere? Google Forms gives you an easy way to create personalized surveys with the style that you want. So we got the first requirement down with that one, but what about sending the data elsewhere? That is where TIBCO Cloud Integration comes in.

There are a few assumptions that I’ve made while writing this tutorial, which should cover the majority of the people reading it. If you have any questions, feel free to post them at the TIBCO Community or here below!

What will we build

First things first, let’s briefly talk about what the end result of the tutorial will be so that you’ll have a better understanding of the moving pieces. The idea is to create a Node.js app that simply logs the information that is posted to it. The information is sent to the app by a simple Google Forms form.

Most apps on TIBCO Cloud Integration start with the API first and this isn’t an exception to it. Because we’ll model the Google Form based on the API we need to specify first how the API will look like. To create an API spec we need to give it a name and a version:

We’ll need a POST operation and in my example I’ll call it ‘request’. The stuff I want to log is quite simple. I want to have a name, an email address and some feedback. You can generate the request schema from a sample message. That sample will look something like this:

As you can see I added a field called ‘apikey’. That field will get a special hardcoded value so my app can check that the input came from the Google Form rather than from somewhere else. The API spec, together with all source code can be found here.

Now let’s generate the Node.js code from the API Modeler and implement the logic. To generate the Node.js app go to the API specs page, hover over an API specification and click Generate Node.js code. Once you’ve unzipped the app open the file ‘request.js’ in the handlers folder and remove lines 19 to 27. This is the default generated code and we’ll replace it with something else. What we want the code to do is check if the apikey matches a predefined value and if so log the data. If it doesn’t match just ignore the data. Your code will look something like the code below:

The last step is to add the below snippet on line 2 of your file. This will make sure the logger is accessible and logs the message in the correct format.

Now simply push the app to TIBCO Cloud Integration using the tibcli utility (or if you use Microsoft Visual Studio Code you can use the plug-in).

To create a Google Forms form, go to Google Drive and select ‘New -> Google Forms -> Blank form’. Simply put three questions on there with ‘short text answer’ as the type:

Now comes the ‘hard’ part, we need to create the code that will send the response to the API on TIBCO Cloud Integration. To do that, go into the script editor for Google Forms and first of all name your project. I tend to call the script projects the same as my forms, but the choice is all yours. Now let’s write some code :)

After that select ‘Edit’ in the menu and choose the item ‘Current project’s triggers’. You’ll see a short message that you have no triggers and that you can create a new one. You should have myOnSubmitHandler in the run column followed by From form and On form submit

You might get a message that your new trigger needs authorization to run, which is totally acceptable as it would need your approval to actually run :) 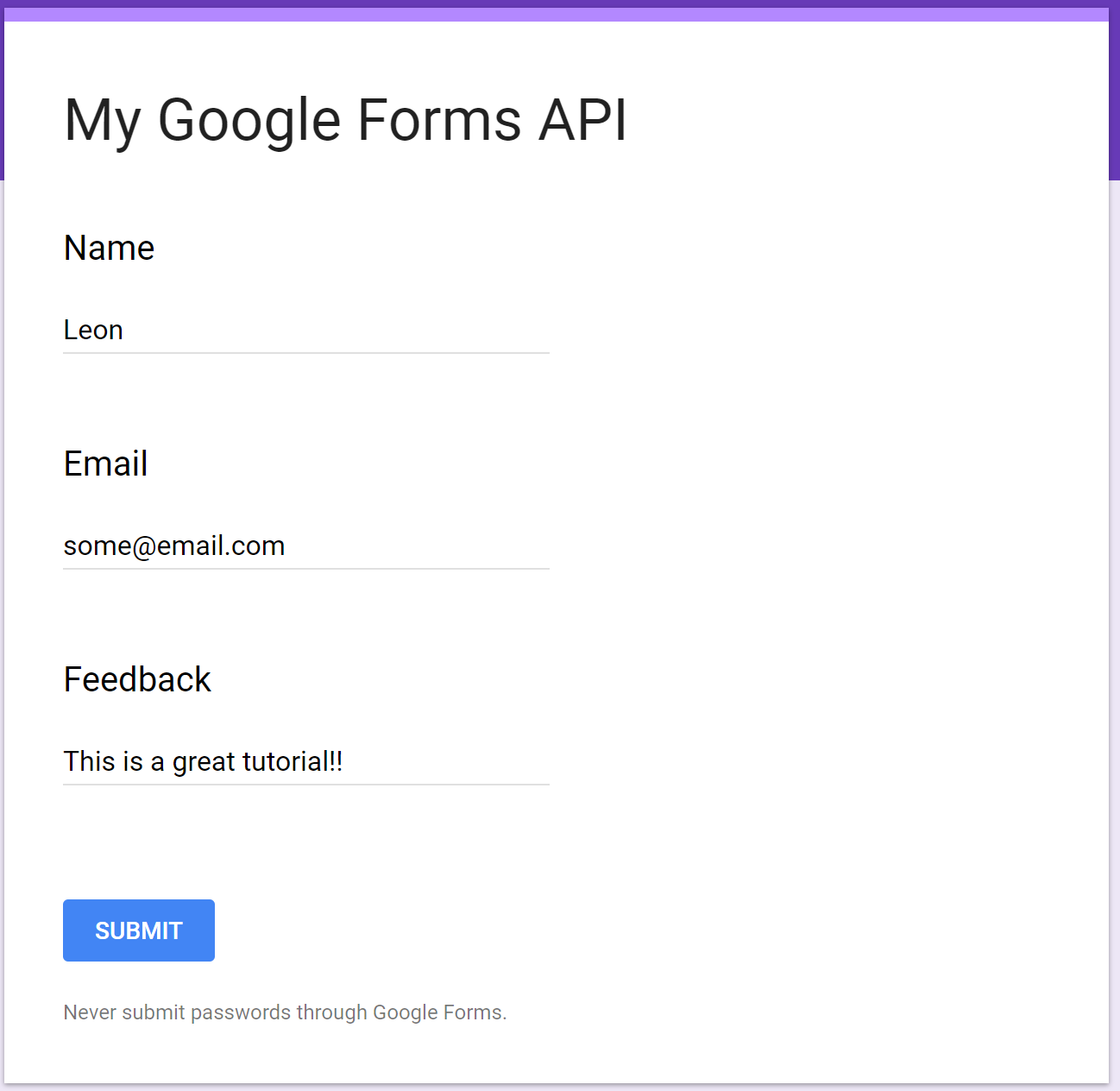 In the logs of your app in TCI should now be a new line that has the same data:

Let me know your thoughts in the comments below or on TIBCO Community!

If you have any questions or comments, feel free to drop me a note on Twitter!